If you're like me you probably enjoy fishing at some of the great saltwater fishing spots in Victoria. But - it's often a question of where?

Where are other people going? What are their favourite places?

While you could ask other people you know there's a good chance they're not going to want to tell you. Not because they're mean, but in fishing, let's face it... Ones company and two's a crowd. Right?

Of course it is. We're all a bit like that. No need to Go GetSalty about it all!

So. How about getting the skinny on the prefered Top 5 Saltwater Fishing Spots in Victoria? You want it? Getfished has got it. With full credit to the VFA government survey.

The good folks at the VFA asked 10,314 Vic Fishing license holders what their favourite Saltwater Victorian fishing spots were. Painstakingly fed the results into their number crunching machine - and out popped...

To the right we've assembled their discoveries for you inside handy tabs.

Below we've assembled their discoveries for you inside handy tabs

Getfished has put it into a quick veiw saltwater chart, a grid showing how far you need to travel - and put the top salty spots onto a map.

Bonus points if you guessed Port Phillip Bay was going to be number one!!

The good folks at the Victorian Fisheries Authority included that information in their 2018 survey of 10,314 license holders, too.

To make it easy to read we've assembled it into charts and tables. Including the fish species and some recommended bait you can try. Some of the things that have worked here at Getfished and other people we know about.

So, firmly holding our breath, they are...

On the right of this text it's available in the tabs.

Below this text it's available in the tabs 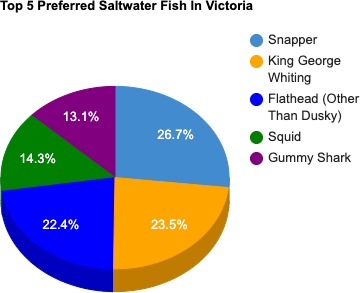 Ever wanted to know some inside information on where people in Victoria choose to fish in freshwater?

Of course you do!

In 2018 the Victorian Fisheries Authority conducted a survey of state fishing licence holders. You are not going to get much more "inside" than that!

They crunched the numbers from 10,314 respondants to the survey. They found the top 5 most popular Victorian freshwater fishing locations were (drumroll):

In the tabs to the right you'll find some of the data they found.

In the tabs below you'll find some of the data they found.

Getfished has put it into a quick veiw chart, a grid showing how far you need to drive - and put the top spots spots onto a map.

Now, if you're not overly familiar with the Murray River you might be thinking: "Hey - that's NSW!" Which of course it is. The Murray River, as if we didn't know, forms the NSW and Victorian border. However both banks belong to NSW.

Cheeky of them, hey?

So, even fishing on the "Victorian side" means you're fishing in NSW. So, yeah, that means a NSW license too. Such is life!

However - most fisho's stay and fish on the Victorian side in towns like Echuca, Swanhill, Yarrawonga and Wodonga. 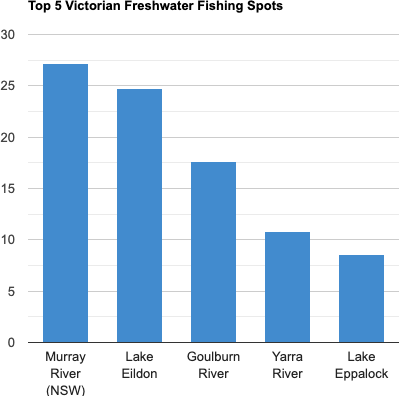 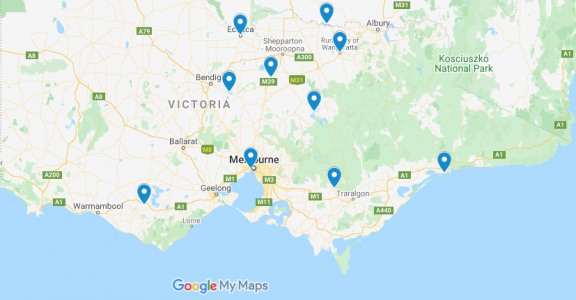 Let's face it. Life can be pretty tough for the weekend warrior fisho.

The experts tell us to go out targetting a specific freshwater fish. Rather than try and catch anything. Thus improving our chances of success.

Starting out with a list of the most popular freshwater fish in Victorian rivers, creeks and lakes would be a good place to start. Right?

So, Getfished is going to help you with that.

Thanks to the state's very own Victorian Fisheries Authority and their helpful survey of license holders let's take a captain cook at the results...

Their results, after surveying 10,314 fishos, gives us an insight into the top 5 most popular Victorian freshwater fish. Which are:

We've compiled these into tabs containing a handy chart, a table with photos of the species.

Plus a tab dedicated to our own recommendations for bait you can try for each fish.

It is available in the tabs to your right of this text.

It is available in the tabs below this text. 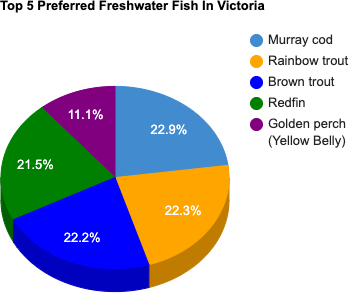 Victoria’s beaches are some of the finest in the world. For the most part, they are composed of small grain sand.  This makes them very soft to…

The Melbourne region, including Port Phillip and Western Port Bays, have a number of “drive yourself” boat hire options.

Some of these companies offer…

There are a number of public boat ramps around Melbourne and the wider area of Victoria.  These are located on the bays and inlets as well…

From the far south-west coast, the central region with the Yarra and Maribyrnong, the massive Lakes Entrance and surrounding…

Creeks offer a wide variety of habitats across Melbourne and Victoria.

Freshwater fishing in Victoria includes a wide variety of habitats and climate zones.

Fishing around Melbourne includes the fantastic Port Phillip Bay, nearby Western Port Bay, the Yarra, Marrybinong and their tributaries.

When fisho’s think of Melbourne…

Some of the best Winter pier fishing in Melbourne, for land-based anglers, is to be had around Port Phillip and Western Port Bays.

Port Phillip Bay is one of the largest inland seas in the Southern Hemisphere.  Connected to Bass Straight and the associated Southern Ocean.

Some of the best Victorian land-based fishing is to be had from rock walls.

These are usually man-made structures, often forming protective harbours for…